Two Arrested after Raping 9-month-old Baby and Recording it on Cell Phone May 20, 2020 adminadmin
Uncategorized
0 Comment

MEMPHIS, Tenn. — Two men were indicted in Memphis, Tennessee, on rape and sexual exploitation charges after a mother found cellphone video of the men abusing her 9-month-old daughter, according to the District Attorney’s office.

Isiah Dequan Hayes, 19, and Dairus Jumare Ice, 22, are being held in the Shelby County Jail.

The victim’s mother told police she found a video on a cell phone and realized the horrific video showed Hayes and her daughter. The arrest affidavit said the attack was reported in October of 2016. 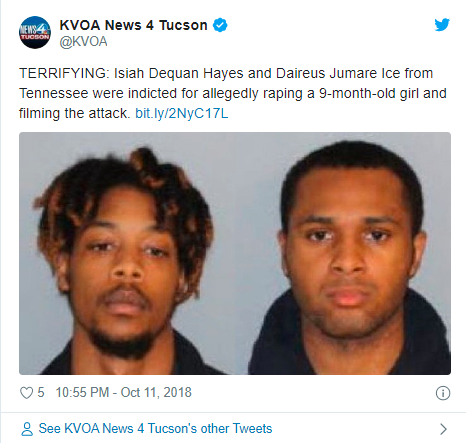 She was able to identify the teen through Facebook and turned the information over to police.

Police were also able to identify the suspect and arrested Hayes on February 13. Police said the young man admitted to the sexual assault.

The district attorney’s office told FOX13 Ice was the person taking the video.

Hayes is charged with aggravated rape of a child and especially aggravated sexual exploitation of a minor.